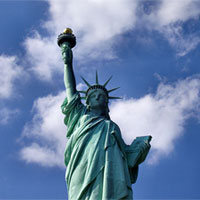 New York
New York is the most populous city in the United States and the center of the New York Metropolitan Area, one of the most populous urban agglomerations in the world. A global power city, New York exerts a significant impact upon commerce, finance, media, art, fashion, research, technology, education, and entertainment

Many districts and landmarks in New York City have become well known to its approximately 50 million annual visitors. Times Square, iconified as 'The Crossroads of the World', is the brightly illuminated hub of the Broadway theatre district, one of the world's busiest pedestrian intersections, and a major center of the world's entertainment industry.

The city hosts many world renowned bridges, skyscrapers, and parks. New York City's financial district, anchored by Wall Street in Lower Manhattan, has been called the world's leading financial center and is home to the New York Stock Exchange, the world's largest stock exchange by total market capitalization of its listed companies. Manhattan's real estate market is among the most expensive in the world. Manhattan's Chinatown incorporates the highest concentration of Chinese people in the Western Hemisphere. Providing continuous 24/7 service, the New York City Subway is one of the most extensive rapid transit systems worldwide. Numerous colleges and universities are located in New York, including Columbia University, New York University, and Rockefeller University, which have been ranked among the top 50 in the world.