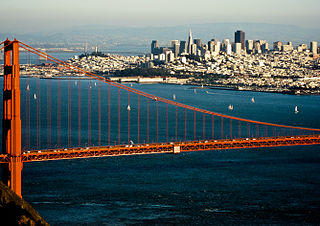 It is the most densely settled large city (population greater than 200,000) in the state of California and the second-most densely populated major city in the United States after New York City. San Francisco is the fourth most populous city in California, after Los Angeles, San Diego and San Jose, and the 14th most populous city in the United Statesâ€”with a Census-estimated 2012 population of 825,863. The city is also the financial and cultural hub of the larger San Jose-San Francisco-Oakland metropolitan area, with a population of 8.4 million.

Today, San Francisco is ranked 44th of the top tourist destinations in the world, and was the sixth most visited one in the United States in 2011. The city is renowned for its cool summers, fog, steep rolling hills, eclectic mix of architecture, and landmarks including the Golden Gate Bridge, cable cars, the former prison on Alcatraz Island, and its Chinatown district. It is also a primary banking and finance center.